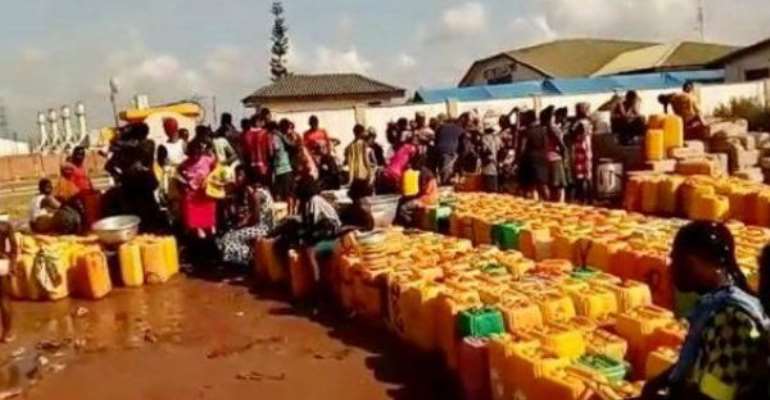 Angry residents of Aboadze and Abuesi in the Shama District of Western Region have threatened to picket at the office of the Ghana Water Company Limited (GWCL) to register their displeasure about the failure to fix their water problems.

The two fishing communities have been battling perennial water shortages for months, but the residents said several attempts to have the problem fixed had not been successful.

Speaking in an interview with Ghana News Agency, the Assemblymember for Aboadze, Mr. Emmanuel Avevor warned that if an immediate solution was not found to their plight, they would not participate in the pending Population and Housing Census.

He said though the twin communities have been grappling with water challenges for several months, the current situation was the worse.

Mr Avevor said the residents in the two communities had endured before getting water to bath, cook and wash their clothes and appealed to the government to consider the need to fix the water problems confronting them.

According to him, the only standpipe in the area could not meet the needs of the over 25,000 population and that people had to jostled to get water every day at the standpipe.

Mr Avevor noted the unfortunate situation has compelled the entire population rely on the newly constructed standpipe by the management of Volta River Authority (VRA) adjacent to their medical facility.

He, however, blamed the situation on the destruction of the obsolete pipelines caused by the expansion works of Twyford Ceramic Company operating in the area.

A resident, Kojo Bonensuma said the water Crisis in Aboadze was quite disheartening as children had to wake up early in the morning to trek to Inchaban in search of water.

“Officials of GWCL are not ashamed but they continue to come to read meters for billing, while we have been deprived of water supply for no apparent reasons,” Sister Esi, a resident of Aboadze remarked.

He explained that the unexpected water problems could be due to the damaged of the out-dated pipeline as a result of the third phase construction works by Twyford Ceramic Company (KEDA).

He said his outfit was engaging the Twyford and the GWCL on the best ways to solve the problem to heap huge sigh of relieve to the people.

Mr Amoah said plans were far advanced to ensure that a new pipeline was laid from Ichaban to Aboadze-Abuesi communities and encouraged the companies in the enclave to endeavour to contribute to the construction of the new pipeline.

He was convinced that once that was done, all water-related challenges would be resolved and people would have water to undertake their daily activities.