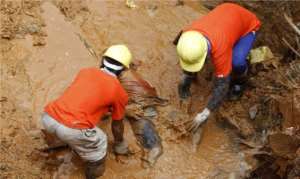 As many as 10 people are feared dead following the collapse of a mining pit in the Prestea Hunivali Municipality of the Western Region.

According to the information gathered, the incident happened on Wednesday, November 24, 2021.

Per reports, over 20 miners were involved when the illegal mining (galamsey) pit caved in.

The incident that happened around 8pm also left 10 people in critical condition.

In addition, several others sustained various degrees of injuries and had to be rushed to the Wassa Nkran community clinic to receive medical care.

The mining pit collapse is just one of many that have happened in the country this year.

Although government is making efforts to bring sanity to the sector, there still appear to be some illegal miners who continue to engage in the act.