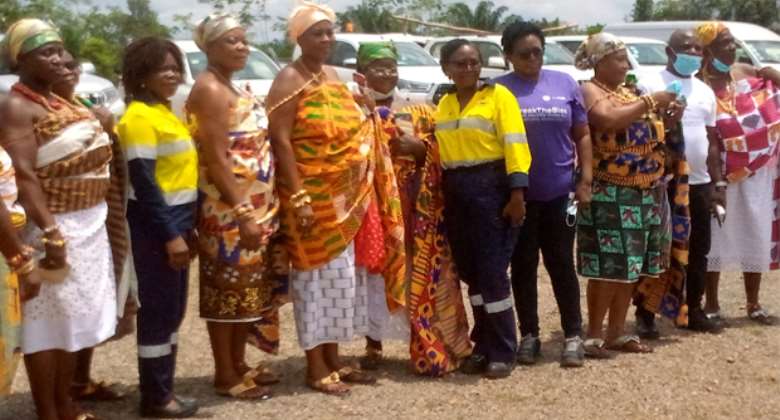 The Queenmother of Apinto Divisional Council in the Western Region, Nana Abena Boadiwaa II, says she sees nothing wrong in a woman making a marriage proposal to a man she is interested in without fear of emasculating him.

In traditions in Africa and across the world, men usually pursue women for marriage, with the men being the ones who buy the rings and propose to the women.

However, Nana Boadiwaa has stressed that a lady can propose to a man as long as she loves him and is sure the man loves her too.

Speaking during the celebration of this year’s International Women’s Day organised by Gold Fields Ghana Limited in Tarkwa in the Western Region, the queenmother said, “If you are madly in love with your boyfriend and he has not any intentions of proposing to you anytime soon, you can break the bias and propose to him strategically, that is privately,” adding that since the guy would know how much the lady loves him, he would be more likely to say yes.

Dr. Celestina Allotey, Vice President of Sustainable Development, West Africa, called for the prioritisation of the girl-child education by parents.

“I am emphasising the education of girls because of the perception of people that even when the girls go to school they will end up in the kitchen. I am a woman, but because I was sent to school and took my education seriously, I am currently an engineer in the mining company, and I cook in the kitchen too,” she charged.

Mary Vida Kwofie, Prestea Huni Valley Municipal Director of Education, also admonished girls to concentrate on their studies so they can become assets to their parents and the nation.

The International Women’s Day is set aside to celebrate women for their immense contribution towards national development, while raising awareness on the need for equality in all spheres of life.