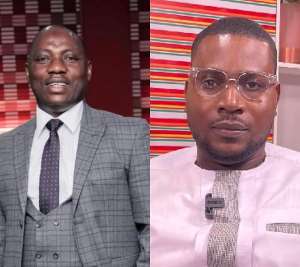 The Executive Editor of Daily Guide, Mr. Fortune Alimi has accused the Executive Director of the Alliance for Social Equity and Public Accountability (ASEPA), Mensah Thompson of trying to always be in the news even when it doesn’t merit it.

This is his reaction to a petition filed by the ASEPA boss asking the Inspector General of Police to go after editors of Daily Guide newspaper over some alleged malicious publications against the Speaker of Parliament, Rt. Hon. Alban Bagbin.

Speaking on the matter in an interview with Citi News on Wednesday evening, Mr. Fortune Alimi stressed that it is either Mensah Thompson is running an errand for the Speaker or he is just making himself a busy body.

According to him, his outfit is ready and on standby waiting for an invitation from the IGP to answer whatever questions regarding the publication made by his outfit.

“We are waiting for the IGP to bring his operatives so that they can come and arrest us because according to ASEPA boss Mensah Thompson he said he was arrested or put behind bars so maybe he is always expecting the same thing. So far nobody has contacted us so we are waiting.

“We are standing on something so if the IGP wants to invite us we are ready to honour any invitation from the IGP but he should have his facts before he goes public,” Mr. Fortune Alimi noted.

Speaking on the same platform, Mensah Thompson who denied consulting for Speaker Alban Bagbin, described the claim by Mr. Alimi as malicious.

“Let me correct some malicious attempts by the Editor of the Daily Guide, I do not consult for the Speaker of Parliament,” the ASEPA boss noted.

He questioned why the Daily Guide has refused to publish the extravagant travels of President Nana Addo Dankwa Akufo-Addo but chooses to focus on the Dubai trips of the Speaker of Parliament, Alban Bagbin.

Mensah Thompson said it appears there is a smear campaign to make the Speaker unpopular in the eyes of the public due to his stance on the controversial electronic transaction levy.

“We are in this country when the President is consistently spending 15 thousand pounds an hour to rent a jet for sometimes over 36 hours and the state is paying for it. Mr. Alimi has not seen these reckless expenditures and has not consistently published these things to malign the president. There is no aorta of truth in what he has published [about the Speaker].

“It looks as if there is a deliberate attempt to court public disaffection for the speaker because of his stance on this E-Levy bill but that cannot be how we continue to practice in this country,” Mensah Thomas stressed.

The ASEPA boss further indicated that just like the Police protect the Judiciary and the Executive, some level of protection should be given to the Speaker of Parliament as well.