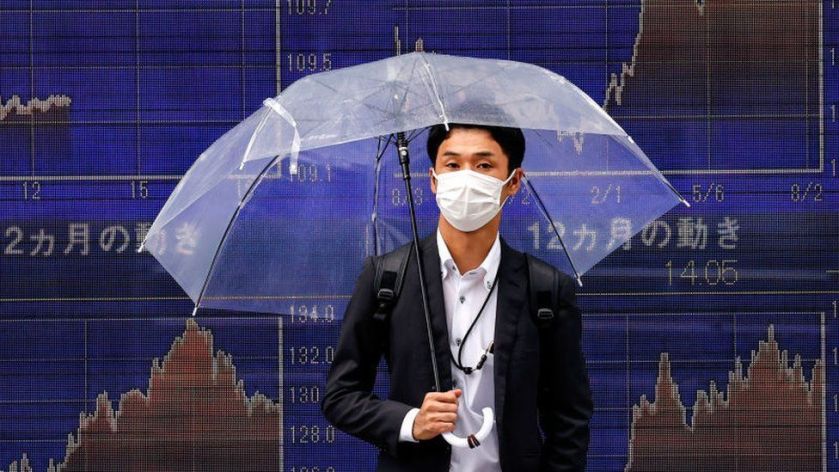 Japan’s benchmark Nikkei 225 index was around 2% lower, while the Hang Seng in Hong Kong was flat.

The Dow Jones index in the US ended Monday’s trade 1.8% lower.

That followed similar falls in Europe, with Germany’s Dax index losing 2.3%, and the Cac 40 in France down 1.7%.

Major stock exchanges in mainland China were closed on Monday and Tuesday for the annual mid-Autumn festival.

Monday’s sell-off was primarily driven by concerns that Evergrande – one of China’s biggest property developers – is struggling to meet interest payments on more than $300bn of debts.

Regulators in China warned it could spark broader risks to the country’s financial system. And investors fear this could hit big banks exposed to Evergrande and companies like it, causing contagion in global markets.

The concerns also come as part of a large impact of the coronavirus on the global economy.

“The fear of an Evergrande bankruptcy appears to be leading to concern about China’s very own Lehman [Brothers] moment, and a big overspill across the region,” said Michael Hewson of CMC Markets.

Investors are also nervous that the US Federal Reserve, which meets on Tuesday and Wednesday, will confirm plans to cut back its support for the US economy this year.

Global stocks have rallied as economies have reopened and central banks have provided trillions of dollars in support to boost growth.

But there are concerns there could be a pull-back, if support is taken away at a time when the Delta variant is starting to drag on the recovery.

Strategists at Morgan Stanley said they expected a 10% correction in America’s S&P 500 index as the Fed starts to unwind its support.

They added that signs of a stalling recovery could deepen that fall to 20%.

However, other analysts played down fears of a rout, noting that September is typically a bad months for stocks.

“Overall, September continues to live up to its bad reputation as historically the weakest month of the year. But that doesn’t mean it can’t rebound,” said JJ Kinahan, chief market strategist at TD Ameritrade.

And Lindsey Bell of Ally Invest said any pullback may be short-lived.

“Much of investing is about sorting through what’s signal and what’s noise,” she said. “While there is concern about the Evergrande situation infecting global markets, for the long-term investor, this situation may just be noise.